The first ever complete recorded Beethoven cycle did come from quite a surprising name; the German Frieder Weissmann (1893-1984) between 1924-1925. The first Beethoven cycle to make a wider splash was by Felix von Weingartner (1863-1942) in the 30s. These cycles are of connoisseur interest but not probably for a general collector. For that reason my journey starts after WW II, covering LP and CD era. I will have a look on complete cycles that have been recorded during different decades. 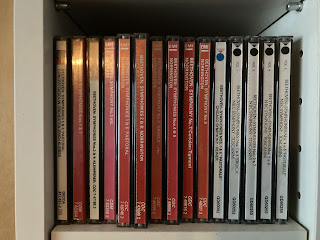 The two great antipodes, Arturo Toscanini (1867-1957) and Wilhelm Furtwängler (1886-1954) did Beethoven cycles simultaneously, Toscanini between 1949 and 1952 and Furtwängler between 1950 and 1954, although the one from Furtwängler is synthetically assembled afterwards as he recorded for studio only symphonies 1, 3, 4, 5, 6 and 7 so his cycle had to complemented with live recordings. The studio recordings with the exception of seventh are surprisingly classicist in approach. Of the live recordings symphony number two has an absolutely horrid recording. Eighth fares a little better, and an exciting recording it is. Ninth is the famed Bayreuth live recording from 1951; an electric, larger-than-life affair. Toscanini did his NBC cycle in the echoless, dry acoustics of 4H studios. The acoustics underline his staccato approach. Nevertheless, the results are often electric (most notably in Eroica and Ninth) while Pastorale is surprisingly relaxed. Of these historical sets that of Toscanini is the one more recommendable on the whole.

Herbert von Karajan (1908-1989) did the first of his four complete cycles in the early 50s with the Philharmonia Orchestra. They are not plagued by the homogenous sound that the later cycles by him possess; otherwise the choice of the general collector is between his 60s and 70s cycles. Carl Schuricht (1880-1967) did a full cycle in France, with the aptly named (the French love their long names) Orchestre de la Société des Concerts du Conservatoire. The Schuricht cycle is well worth hearing for the agile musicianship of Schuricht and for the uniquely nasal French woodwind. Eugen Jochum (1901-1987)  recorded first of his three cycles by using two different orchestras; the Bayerisches Rundfunk-Orchester and Berliner Philharmoniker. Some of the recordings are in mono. For me the Jochum cycle has a sense of rightness about it, generally offering well-proportioned middle-of-the road big band readings.

In the late 50s the octagenarian Bruno Walter (1876-1962) recorded a cycle with studio musicians under the label that was called the Columbia Symphony Orchestra. It represents a mellowed Walter and varying results. Best fare symphonies number 4 and in particular Pastorale that many regard as an unsurpassed recording. Ninth is seriously underwhelming. In Eastern Germany Franz Konwitschny (1901-1962) recorded a classic, immensely satisfying cycle with the Leipzig Gewandhausorchester in beautiful sound.

EMI recorded two full Beethoven cycles quite simultaneously; those of Otto Klemperer (1885-1973) with the Philharmonia Orchestra and André Cluytens (1905-1967). Klemperer already had recorded some of the symphonies in mono, and those recordings (Eroica, 5th and 7th) give a more vivacious picture of his art. By the late 50s his tempi had already slowed down, but in some symphonies, most notably in Eroica his personal magnetism is undiminished. Cluytens' cycle is musicianly well played big band central Beethoven without greater idiosyncracies. George Szell's (1897-1970) cycle with the Cleveland Orchestra is influenced by Toscanini but better recorded. In his cycle the particular standouts at least for me are symphonies 4 and 7; in general his set is very consistent and it is only first symphony that may disappoint as Szell opted to use small orchestra so that the recording gives somewhat an underpowered impression. Generally the drive and peerless execution makes this as one of the best Beethoven cycles recorded anywhere, anytime.

The first stereo cycle of Herbert von Karajan may well be the Beethoven bestseller of all time and in the general critical reception it is held in highest regard of his cycles. It is a solid, beautifully played cycle with the exception of Pastorale. Karajan just can't get it right as he was unable to relax and smile.

Paul Kletzki (1900-1973) was lucky to have the Czech Philharmonic as his band as their distinctive sonority with perky woodwinds give lovely character to the music. Kletzki's cycle is in general at least in the top ten of all Beethoven cycles, maybe even in the top five.

Rudolf Kempe (1910-1976) had a decidedly second rate Münchener Philharmoniker as his orchestra, and at times his Beethoven sounds somewhat underpowered but at best (most notably in second symphony and Eroica) his lyric, big band humanist approach bares beautiful fruit. In fact those two symphonies receive for me ideal performances; they may be slow burners, gathering pace and cumulating power gradually.

Herbert von Karajan had by the 70s adopted somewhat thicker sonorities since the 60s, but still this cycle is on par with his older set. In Karajan's conception the Fifth symphony and Ninth are standouts, and surprisingly the perky eighth which Karajan gives a full monty treatment. For him that work was clearly no kids' play but adult affair.

Eugen Jochum had London Symphony as his orchestra, and they play admirably. Jochum's cycle is quite oldfashioned, big band Beethoven a la Cluytens or Konwitschny, but Jochum inserts an optimistic, humanist note into his Beethoven. When I have managed to order his Icon box I have to familiarize more with it.

Herbert Blomstedt was born in 1927 and is still going strong. I once already had his Beethoven cycle with the Staatskapelle Dresden but at that time thought that my oldtimers (Walter, Furtwängler, Toscanini, Klemperer) would do the job. When I returned to the cycle after ten years, I was almost shocked as Blomstedt beats them all. It is probably the finest sounding Beethoven cycle of all times as it is the vintage Staatskapelle, and Blomstedt lets them play without interfering too much. The standout performances in this cycle that is of impeccably high standard throughout are for me the Fourth and Ninth symphonies. In Blomstedt's hands Beethoven has weight but the orchestral fiber is still transparent. There is always light between the clouds.

The 1980s introduced digital technology and surprisingly the first conductor to record a full digital Beethoven cycle was not Karajan but another Herbert, Herbert Kegel (1920-1990). His Dresdner Filharmonie give a very good, consistent big band cycle without greater idiosyncracies. His namesake Karajan had by the 80s developed a sound that was not in particular thick but yet very untransparent. No mean achievement. Karajan is heard to greater advantage in his 60s and 70s cycles.

Then in the mid-80s a revolution occurred in the world of Beethoven. Men like Roger Norrington (1934-), Christopher Hogwood and Roy Goodman had ended up in their chronological journey through "old" music (for me Beethoven is never old though) all the way to Beethoven. It was most notably Norrington for whom metronome was the Bible and who all of a sudden changed the norm, and it became shameful to play Beethoven like Karajan et al. had did.

Luckily Günter Wand (1912-2002) was not aware of all of that and if had been he would have give short shrift for that. When he recorded his cycle, his cycle did not make much of a splash as everyone was busy with their Norringtons. Now after some decades one can only lament that Wand did not get all the affection he deserved, as his Beethoven is the best that a big band Beethoven has had to offer ever: earlier or later. His Beethoven has frequently somewhat stately tempos but yet there is impetus, immense power yet lyricism. His Beethoven has all of the granitic integrity of Klemperer, impetus of Szell and lyricism of Jochum. A top achievement.

In the 90s just two Beethoven cycles stood out in the critical reception: those of Colin Davis (1927-2013) and Nikolaus Harnoncourt (1929-2016). Colin Davis' cycle came when Norrington and his likes had changed the listening horizon of the critics. He has the advantage of the Staatskapelle Dresden that still sound the Staatskapelle of the old. Performances are certainly grand scale but they somewhat lack momentum and are a little bit short of excitement. They are beautifully played and recorded, but Staatskapelle is heard to better effect in the Herbert Blomstedt cycle.

I have not listened to the Harnoncourt cycle since its release and I should revisit that to check whether my initial lukewarm reception would still be valid.

Then there is one unearthed gem that is Peter Maag (1919-2001). Maag who shunned jetset lifestyle just as Okko Kamu made his cycle with the unheralded Orchestra di Padova e del Veneto. Maag's cycle is absolutely wonderful: his chamber sized orchestra sounds like a real symphony orchestra. Maag, a disciple of Furtwängler applies frequently pretty easygoing tempos and invests a wonderful sense of lyricism with a mixture of drama and cantabile. Wonderful stuff.

The greatest Beethoven cycle of the millennium that I am aware of comes from a suprising source that is Stanislaw Skrowaczewski (1923-2017). Skrowaczewski recorded with his Saarbrücken Radio Symphony a wonderfully fluent cycle with all performances ranging from very good to extremely good. Listening to Skrowaczewski's Beethoven one hears echoes of a man who gave Skrowaczewski his US debut; the indomitable George Szell, although there is a touch of warmth, smile and humanism added to season the sauce. Skrowaczewski's cycle belongs to my top echelon on Beethoven cycles.

Another 21st century Beethoven cycle that I am aware of comes from the Austrian modernist Michael Gielen (1927-2019). Gielen doesn't indulge; instead his Beethoven is swift, mean and rough. Gielen's musical integrity has shades of Klemperer, but his conception has surprisingly echoes of HIP (=Historically Informed Practices). No Norrington this time though as Gielen makes use of the sonorities that a modern orchestra has to offer. A refreshing set where in particular Seventh and Ninth are standouts; surprisingly their white-hot intensity reminds me of Toscanini. Still, the mixture of the "Herr Neue Sachlichkeit" is based on his own analysis. 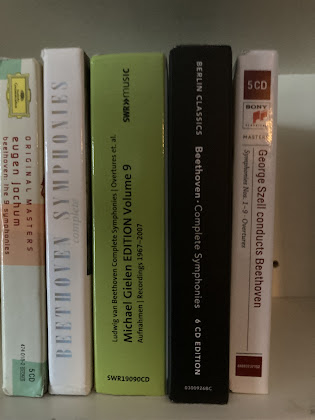